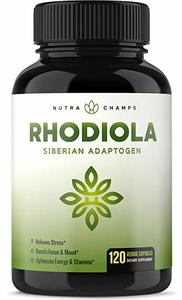 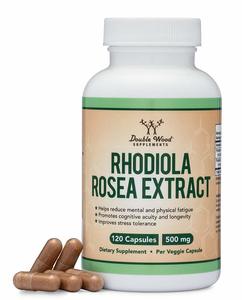 Our Review of Rhodiola Rosea

Are you the type of person who experiences fatigue, stress, anxiety, or depression more often that you want?

If this is you, I'm sure you’re trying all you can do to find something that can help you get rid of these ailments. I used to be stressed and depressed, and this cost me a lot in many areas, as well as, made me less productive throughout the day.

For some time now, I've tried numerous products to help me get rid of this problem. Some helped, some did not.

But one of the most valuable I found was Rhodiola Rosea supplements.

Before I tried it, I was skeptical due to the numerous products I've tried that didn't work, but I am so glad I tried this product.

Surprisingly, it’s a big part of the solution I'd been looking for! I have been using this product for some months now, and I've never regretted using it. I want to tell you a bit about some of the wonderful things I’ve learned about this product.

Rhodiola Rosea supplements are extracted from the Rhodiola Rosea plant which is found mostly in Asia and Europe. Rhodiola Rosea, also called Golden root or Arctic root, is a type of herb which has been proven to improve an individual's ability to fight stress naturally.

Most of the nutrients in this plant are found in its roots. The roots are normally dried, powdered, then prepared as a tea. It can also be found in liquid, capsule, or powdered form. Personally, I like the ease of using capsules.

According to research, this herb not only has a favorable effect on one's performance mentally, but it also boosts the function of the immune system.

Extracts and supplements of Rhodiola Rosea also increase resistance in the human body to toxins. This is very beneficial for individuals suffering from day to day stress, and need to find a consistent way to relax from all the distractions that come.

A recent study shows that Rhodiola Rosea is an amazing adaptor which assists the body in gaining systematic balance to get back to its original function after it has been exposed to stress.

This is a remarkable benefit to people who continually deal with hectic schedules, critical situations, and high expectations. Likewise, it is necessary for individuals who feel "burned-out" as a result of prolonged stress periods or long-term continuous work.

There were significant improvements in stress symptoms in all clinical trials. The clinical trials involved people who showed repeated symptoms of stress in their lives, such as, moodiness, discomfort, sleep disorders, low energy, muscular aches, and so on.

Rhodiola Rosea has been shown as an effective and safe treatment for moderate or mild depression in many patients.

How did they get those results?

According to trials, it was noted that when one uses a normalized dose of Rhodiola Rosea twice-daily, it resulted in a significant reduction of depression, emotional stability, insomnia, and some other problems in patients who have been diagnosed with moderate or mild depression.

Rhodiola Rosea is known as a valuable fatigue fighter, normally decreasing or getting rid of the negative mental effects and physical exhaustion.

It is most effective in fighting the type of fatigue created by repetitive or prolonged low-intensity exertion or prolonged moments of stress; it's also been proven to improve the length of effective exercise time.

Rhodiola Rosea is highly effective in enhancing athletes’ performance. It is also useful for workers, students, and other individuals who need to keep moving forward with their daily life after fatigue sets in.

It has been proven to reduce or relieve individuals of several physical symptoms of fatigue such as; feelings of sleepiness, tiredness, soreness, muscle aches, and headaches.

Likewise, it has been shown to address several cognitive symptoms of fatigue such as decision-making ability, impaired judgment, irritability, moodiness, and also diminished capacity for mental work.

Pros and Cons of Rhodiola Rosea

Rhodiola Rosea seems most effective at lowering symptoms of stress and anxiety with dosages of a minimum of 576 mg daily.

Rhodiola Rosea is a wonderful Supplement that can not only help in the relief of stress, anxiety, and depression, but has many valuable attributes for both body and mind.

Allow us to aid your search by introducing the top two Rhodiola Rosea  products that we have tried and know they work.

In our Review of Rhodiola Rosea, we found it to be a wonderful supplement with many benefits in addition to reducing stress and anxiety.